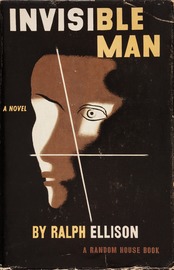 Invisible Man is a novel by Ralph Ellison, published by Random House in 1952. It addresses many of the social and intellectual issues faced by African Americans in the early twentieth century, including black nationalism, the relationship between black identity and Marxism, and the reformist racial policies of Booker T. Washington, as well as issues of individuality and personal... Wikipedia