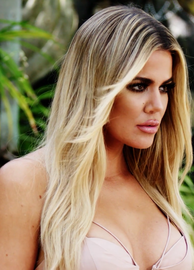 Khloé Alexandra Kardashian is an American media personality, socialite, and model. Since 2007, she has starred with her family in the reality television series Keeping Up with the Kardashians. Its success has led to the creation of spin-offs, including Kourtney and Khloé Take Miami and Kourtney and Khloé Take The Hamptons. From September 2009 to October 2016, she was... Wikipedia