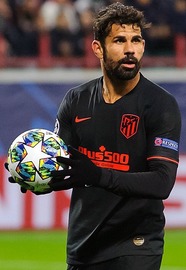 Diego da Silva Costa is a professional footballer who last played as a striker for Spanish club Atlético Madrid and the Spain national team. Costa began his football career in his native Brazil before joining Braga in Portugal in 2006, aged 17. He never played for the club but spent time on loan at Penafiel, and signed with Atlético... Wikipedia