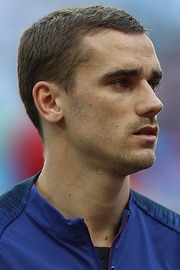 Antoine Griezmann is a French professional footballer who plays as a forward for Spanish club Barcelona and the France national team. Born and raised in Mâcon, Griezmann began his senior career with Real Sociedad in 2009, with whom he won the Segunda División title in his first season. In 2014, he joined Atlético Madrid for a then-club record €30... Wikipedia